I grew up in a wonderful home with an amazing mother. My 2 grandmothers lived close by and we were spoiled by them. One was named Anna and the other Rhea Anna. And so my handle if you will is Granny Ann. Together those 3 women taught me everything and taught me how to love living life by hand. I hope you enjoy the adventure as much as I have.

I love to dercorate my house for the holidays. My mother made every holiday special for us. This year I found this adorable pattern for a witch hat decoration. It is embroidered on wool felt. The brim of the hat called for rickrack but I didn't want the additional expense so I just used my curved rotary cutter to make the cute edge. This pattern can be found at www.bloomingstitches.com 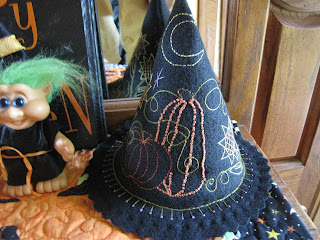 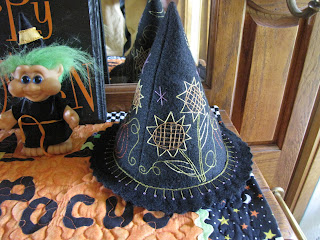 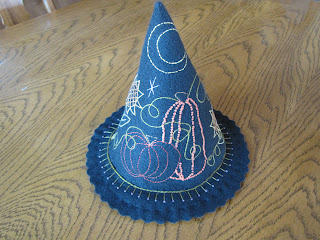 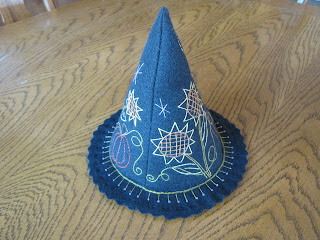 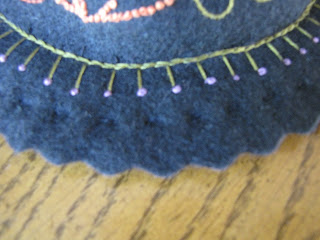 Posted by GrannyAnn at 10:53 AM No comments:

When I started having grandchildren I turned into my mother. They needed to have most of everything handmade. They needed it not me needing to make it. My favorite thing to make them is a quilt. I started out very simple for the first grandchild. Here is his quilt. 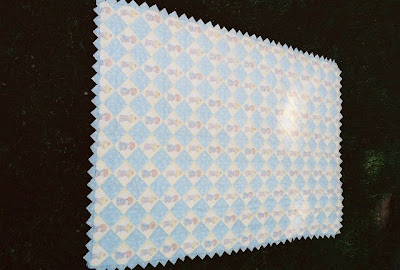 Some quilts are so simple. You just need the right fabrics. This quilt is just one piece of fabric. My favorite "Precious Moments". The backing is flannel. I quilted it with large stitches using crochene thread. The edging is picot. Fun and fast. 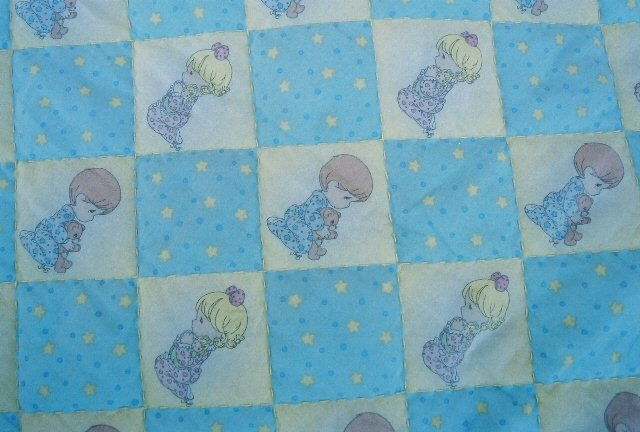 This little quilt is the same thing, just 2 cute fabrics quilted together but with a ruffle edging. 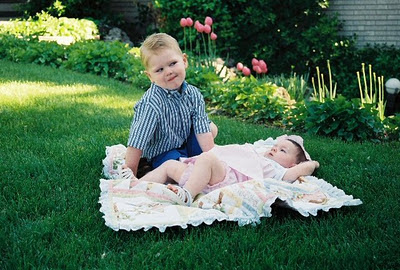 Too bad when I took this picture years ago all I wanted to see were my littles. :)
Posted by GrannyAnn at 1:25 PM No comments:

One of the church groups in our town used to make individual chicken pot pies every Fall as a fund raiser. I remember waiting, with mouth watering, by the front window until I could see my Dad driving up our driveway. They were so amazing and the gravy to smother them in made them fantastic. I keep trying to duplicate them but to no avail. I never seem to have enough mini pie tins so I just tried it in my large cupcake tins. So close the what I am looking for but until then . . .Cute and fun. 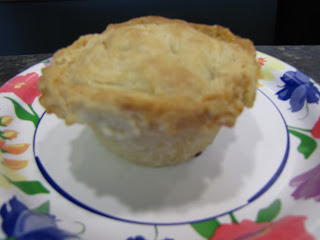 Make a recipe of pastry for a double crust pie. If you have not made Pastry crust before go here for a link on how to do it. It is very easy the only equipment you really need is a pastry cutter. Divide dough into to pieces, one almost twice as big as the other. Divide each half into 6 balls starting with the larger half. Pat or roll out each of the 6 larger balls into a 7 inch circle. 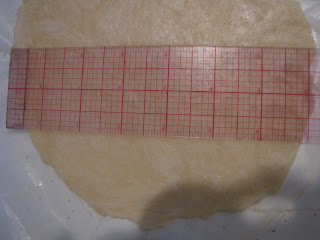 Tip: I use 2 pieces of waxed paper. Put one piece on your counter, place a ball of dough in the center. Pat out into a 3 inch circle. 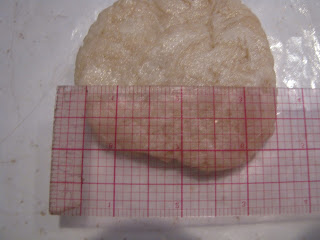 Cover circle with the other piece of waxed paper and roll into a 7 inch circle using a rolling pin. 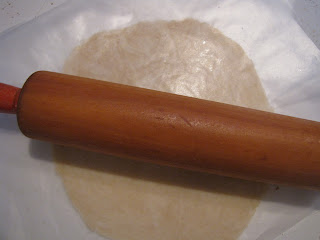 The dough will slightly stick to the waxed paper so just carefully peel off the top layer. Pick up dough by the bottom waxed paper, place over one of the cups on a large muffin tin and gently peel off waxed paper. Gently help dough down into the cup making sure not to poke a hole in the crust. Allow the crust to fall over onto the cupcake tin. 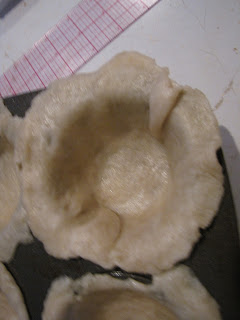 Repeat process for each of the remaining cupcake sections. Fill each crust with filling (see below for a chicken filling). Repeat rolling out process with each of the smaller dough balls, rolling out to only 4 inches. Moisten surface of bottom crust before laying top crust over it. This will help to seal the edges. 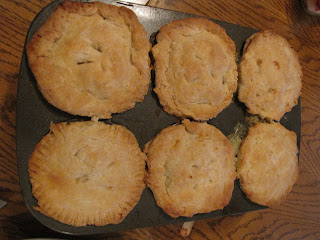 Edges can be sealed together by pressing the tips of a fork around the edge of the crusts of by folding the outer crust up and cover the top crust and crimping in place. Make several slits in the top crust. Bake @ 400 ºF for 20-25 minutes or until crust is golden brown.
Filling:
1 3/4 cups chicken broth
In a small pan add chicken broth and 3 veggies. Simmer until tender. While simmering combine butter and flour to make a roux, no need to cook but you can if you want. Do not remove veggies from heat but add peas, chicken, seasonings and milk.  Keep heat on and slowly stir in roux and stir constantly until mixture is thickened.
Posted by GrannyAnn at 11:03 AM No comments:

I love the Holidays. My mother decorated for all the holidays and I can still feel the magic in our home. I used to decorate for my children, now I decorate for my grandchildren and to remind myself of the little kid still in me. It's always a good idea to make things special especially when children are involved. And since banners are all the rage right now I made a reversable one for my all tree. It's Halloween on one side and Harvest on the other. 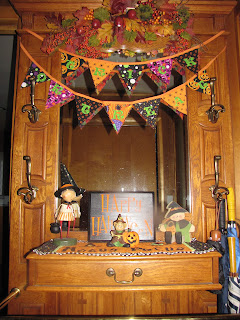 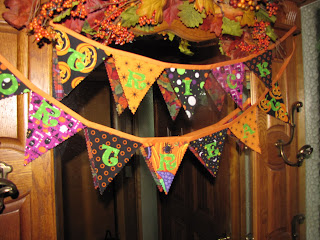 Posted by GrannyAnn at 12:31 PM No comments: